BUSINESS LEADERS: YOU CAN STOP VOTER INTIMIDATION BY (1) DEBUNKING THE LIES JUSTIFYING IT, AND (2) EXPLAINING WHAT THOSE LIES COST YOUR LOCAL ECONOMY 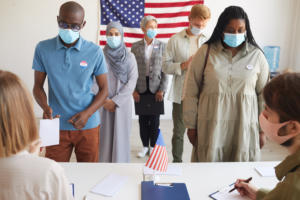 Republican campaigns and outside groups like True the Vote are recruiting Trump supporters to police polling places and deter what they describe as widespread voter fraud. They are well funded and well organized — and President Trump is helping them.

True the Vote claims between 3% and 5% of votes cast each election are fraudulent. The most recent and comprehensive investigation by election officials covered nearly 12 million ballots across five states. They found only 0.001% of ballots were potentially fraudulent. What’s the difference? Well, 5.000% is 1 in every 20, which implies 7 million fraudulent votes this cycle (nationwide). By comparison, 0.001% is 1 in every 100,000, which implies about 1,400 fraudulent votes. In other words, True the Vote and its allies are exaggerating voter fraud by a factor of 5,000.

What experts does True the Vote cite? None. Heritage Foundation, a conservative think tank, collected voter fraud records from more than 36 years of elections (1982-2018). They found 1,200 cases. That’s about 0.0007% of the ballots cast in the elections they covered (or one in every 1.4 million). A new study from the Public Interest Legal Foundation identified 140,000 cases of possible fraud in the more than 251 million ballots counted during the 2016 and 2018 elections, but they count cases that are likely voter error (not fraud). This overstated analysis equals 0.06% of votes cast, or one in every 1,667.

Why would Republican groups exaggerate by a factor of 5,000? Crowds of poll “watchers” could intimidate voters and slow poll lines, suppressing the vote. We’ve already seen examples of this during early voting in Virginia. These groups will target our most vulnerable communities — and they will focus on polling places that are poorly staffed and have long lines. Claims of fraud might help if Trump loses a close vote. In 2016, Trump claimed Los Angeles County counted more than 1 million fake ballots. He attributed his loss in New Hampshire to “busloads” of out of state voters.

What can business leaders do? You can talk to any of your friends, neighbors, customers, and employees worried about voter fraud. Americans generally trust business leaders over their mayor, governor, or President. Business leaders are particularly effective when the topic requires explaining probability and effect, like this one. Most Americans may not appreciate the difference between 5.000% and 0.001%, but you do.

There’s a second argument – one already being made by CEOs across the Fortune 500: Harassing vulnerable Americans at the polls, suppressing the vote, and undermining the integrity of the vote is bad for business. Take Indiana, where the CEOs of Cummins and Eli Lilly, two of the state’s biggest employers, have pledged to work for social justice and are urging every Hoosier to vote. “We live in a representative democracy and each of us needs to make sure that our elected officials represent all of the population,” they explain. “If we vote, we can reshape our country and put in place leadership that cares for and reflects the diversity of our communities… What we have today is simply not enough. We need to work together to root out hate and replace it with a deep and abiding appreciation for diversity, equality, and inclusion.”

Why are they taking such a public stand? One reason is that Indiana competes for new jobs and investment with 49 other states, and growing companies look for strong communities just as they look for good schools, sound infrastructure, and a talented workforce. A few years ago, Indiana landed thousands of new jobs and more than $40 million in new investment from Salesforce, thanks, in part, to this inclusive spirit. This election, Salesforce has joined with Cummins and Eli Lilly in promoting the Indy Racial Equity Pledge in Indiana.

By debunking outrageous claims of voter fraud, small business owners, entrepreneurs, and executives like you can ensure a fair, safe, and full election. It’s good for America, and it’s good for business.