Appropriate risk management could be a lasting solution to climate change, according to Robert Litterman, former head of risk management for Goldman Sachs. “The risk of climate change is not currently being priced,” Litterman said in a briefing with business leaders this week. “As a result, globally, humans are taking on too much risk.”

We do not know the full capacity of the atmosphere to absorb carbon emissions, Litterman said, but we do know “whatever remaining capacity exists, it is a scarce resource. By not pricing emissions, we are wasting that capacity.”

Because increased carbon emissions increase the risk posed by climate change, the risk should be priced appropriately, Litterman said. One way to do so is with a carbon tax.

“Carbon emissions increase the risk of climate change, and thus there should be appropriate incentives to reduce those emissions,” Litterman said. “Not including such incentives in the tax code is a serious risk management failure.”

Globally, governments are acting, and Litterman expects the United States will join them soon, perhaps within the next few years. Once the United States implements a significant carbon tax, he said, “there will likely be a convergence across countries to impose significant global incentives to reduce emissions,” leading to a “phase change” in the global economy.

“With incentives set appropriately,” Litterman explained, “economic agents–consumers, businesses, entrepreneurs, investors–will all make the right decisions. Consumption, production, research, and investment will all be appropriate and will be directed appropriately by prices in free markets. These incentives will stimulate investment in the low carbon infrastructure in the future, and they will rapidly reduce emissions, hopefully soon enough to avoid [a] potential catastrophic outcome.”

For further discussion of the risk of climate change, the political reality of a carbon tax, and questions from business leaders like you, listen to the full recording of our conference call with Robert Litterman here. Robert is an economist and risk manager on Wall Street and was head of Risk Management for Goldman Sachs. In the past decade he has focused on climate risk and bringing risk management lessons from Wall Street to this arena. 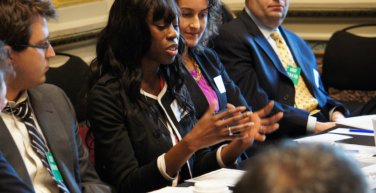